Showing posts from February, 2013
Show All

A Coincidence and Donation

By Guria Blogger - February 18, 2013
The current Princeton Bridge Year volunteers at Guria were sitting in a café when they heard other customers nearby say one of their names. They turned around, thinking the other customers were addressing them, but it was only a coincidence that they referred to someone with the same name. After exchanging questioning glances, the volunteers started talking with one of those customers, first about the coincidence, and then about their experiences so far in India. They talked at length about their work with Guria. He was inspired by the efforts of the organization to end human trafficking, and their fearless presence in the red-light areas. After talking with the volunteers, he generously donated 10,000 rupees to Guria. We are incredibly thankful for his kind donation!
Post a Comment
Read more

Painting at the NFE Center! 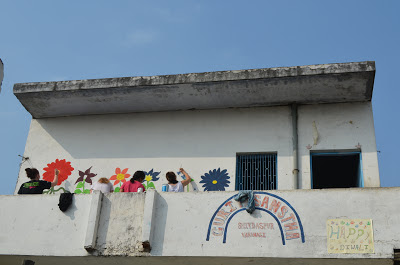 We recently hosted five volunteers from Global College, Long Island Univeristy, who spent three weeks in Varanasi as part of a year-long course on Comparative Religion and Culture. In addition to playing games with the kids at the Non-Formal Education center and helping out with English and Computer classes, they helped beautify the building by painting a mural on one of its walls, adding to the many murals painted over the years by various volunteer groups. We thank them for their help!
Post a Comment
Read more
More posts