Showing posts from July, 2015
Show All

By Guria Blogger - July 31, 2015
Three students from the Atlanta International School who participated in Guria's FREEDOM NOW Global Art Exchange & Exhibit 2015 were chosen to have their pieces displayed at the Freedom Expressions ATL Exhibit at the Hartsfield-jackson Atlanta International Airport, the world's busiest airport! They were honored with special certificates signed by Kasim Reed, the mayor of Atlanta, Georgia, and Doug Shipman, the CEO of Center for Civil and Human Rights at the time. For more i nformation about the Freedom Expressions ATL Exhibit, please visit: https://www.civilandhumanrights.org/freedom-expressions-atl… ‪#‎ freedomnow‬   ‪#‎ freedomexpressionsatlexhibit‬   ‪#‎ humanrights‬ ‪#‎ humantrafficking‬   ‪#‎ slavery‬   ‪#‎ Guria ‬#artexhibit
Post a Comment
Read more 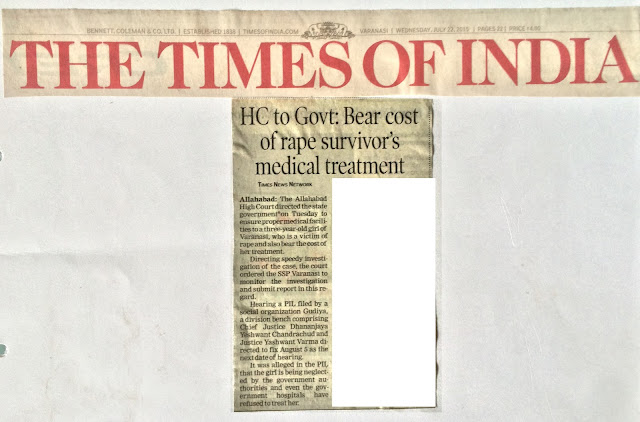 Guria's latest public interest litigation drew attention in the national media! Guria filed a public interest litigation(PIL-39836/2015) in the hon’ble high court against the negligence in medical treatment by the doctors and the police filing a delayed complaint a week later in the wrong sections regarding a 3 year old girl's rape case in Varanasi. On the 21st of July, 2015, the hon’ble Chief Justice directed the Senior Superintendent of Police to ensure complete monitoring  of the whole investigation and B.H.U. hospital to undertake the complete treatment of the victim child on the expenses of the State. Guria has also prayed for directions to the court to file cases against the erring policemen and the doctors who always get away with their wrongdoings. ‪#‎ humanrights‬   ‪#‎ humantrafficking‬   ‪#‎ slavery‬   ‪#‎ freedomnow‬   ‪#‎ Guria‬ ‪#‎ justiceforrapevictim‬   ‪#‎ rape‬   ‪#‎ justice‬
Post a Comment
Read more

By Guria Blogger - July 28, 2015
The kids at Guria’s center in Varanasi’s red-light area participated in a hula hoop work shop under the instruction of the American and Canadian interns, Talia, Emma, and Kelly. Time for some fun!  ‪
Post a Comment
Read more

Taking care of our precious plants! 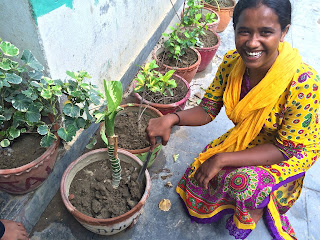 The children of Guria's center in Varanasi's red-light district taking care of their plants! These plants are planted by the children themselves with the purpose of learning how to care for nature and be part of the entire existence around them. Each are dear to the children.
Post a Comment
Read more

Justice for a 3 year-old rape survivor 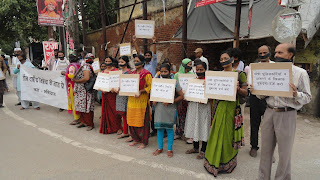 On June 5th, in Varanasi, a 3 year-old girl was brutally raped and suffered severe genital mutilation leading to a life-threatening condition. Additionally, both her and her grandmother were denied treatment from 4 different hospitals before returning to the first hospital where doctors demanded bribes. Simultaneously, after the family members threatened to commit suicide, the police FINALLY filed a complaint, 6 days later. However, there were  no charges of rape mentioned in the complaint. After Guria Sansthan caught wind of this incident on June 22nd, we immediately admitted the child to a hospital and are covering the medical expenses. She continues to FIGHT for her life. After multiple requests, NO action has been taken against the accused, the police, or the doctors. Guria’s efforts have drawn the support of people all over Varanasi, who are now protesting against this heinous crime. These are the battles we are fighting every day. We need your help too.
Post a Comment
Read more
More posts