For all past appeals by Front Line that feature Guria visit: https://www.frontlinedefenders.org/search/node/Guria
Learn more about Paradigm Shift Project's fight against trafficking here: https://www.theparadigmshiftproject.org/sex_trafficking.html 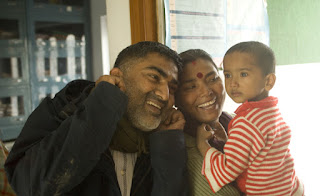 Man of the Year with his family
Read the fully story here: https://ibnlive.in.com/news/real-hero-ajeet-fights-against-female-trafficking/172550-3.html
"Baked by India’s mid-day sun, the red-light district in Varanasi looked like any other sleepy, parched drag on the outskirts of town. There was no glamour; no flashing lights, fancy dresses or fine dining – the typical masks worn by an industry that lays waste to women’s most basic rights and makes human sensuality a commodity to be bought and sold. When I looked up over the barbed wire that lined a high stone wall, I saw children peering down at me with awakened curiosity and excited anticipation.

Guria is a grassroots NGO staffed by less than a dozen men and women. When they’re not organizing their next vigilante crackdown of a brothel that employs (or rather, deploys) minors, they are committed to relieving the illegitimate children of brothel slaves from the only birthright India gives them: a lifetime-status as personae non grata.

Leading me through the facilities, the matriarch of the place explained how Guria is constantly under attack from all sides: gangsters, drug dealers, pimps, politicians, and police are all in on the sex trade. When bribes from small-time thugs are turned down, a cavalry of corrupt police are called in to shut down rescue missions by jailing or executing Guria’s volunteer staff.

As we walked through the ramshackle compound, boys and girls scampered around us, excitedly applying their improvised English lessons: “Hello.” “How are you?” “What country?” “My name is Mala.” “Picture-photo?”

I was puzzled that children born into an underworld of human suffering could still laugh and play with downright exuberance. The explanation came when the matron showed us the children’s daily ritual of meditation.

My idea of meditation involves taking time just to be present. Meditation for children in Guria could not be more different – to be present is to suffer the harsh realities of a life without family, freedom, opportunity or hope. I was grateful for what precious little Hindi I knew as I sat and listened to the matron directing the fifty odd children sitting cross-legged, eyes squeezed desperately tight. “Do not be angry with your mother…You are loved…if you see someone suffering, help them…Now go far, far away…Keep going…Farther…”

“It’s so important,” she whispered to me with quiet satisfaction. “Within ten minutes, they’ll all be asleep.”

Initially I chose to take time away from school to travel around India because there’s a norm amongst my fellow twentysomethings to get out and “see the world,” to not “let life pass us by.” The children in Guria close their eyes and meditate because the world does not want to see them. Their lives pass them by long before they can even realize it.

Every moment spent in a makeshift daydream, a meditative trance or an afternoon nap is a moment not spent as just another foregone conclusion. Outside those barb-wired walls, they will always be seen as a walking mistake; the strange fruit of virtue betrayed; the unwelcome reminder that even Varanasi – India’s “city of saints” – has its district of sin."

By Guria Blogger
Guria Swayam Sevi Sansthan is a non-profit organization dedicated to fighting human trafficking and forced prostitution in Northern India. Based in Varanasi, Uttar Pradesh, we respond to immediate suffering and investigate the root causes of prostitution, poverty and inequality. We believe in a multi-faceted approach to fighting this deeply entrenched problem. We are involved in legal aid and intervention, victim rescue and rehabilitation, NFE (non-formal education) centers in the red light areas of Varanasi and Mau, a boat school on the Ganges River, police sensitization programmes, rural womens’ empowerment, activism and research. We strongly believe that through grassroots and prevention work, it is possible to end this modern form of slavery.
Read more 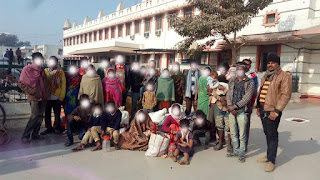 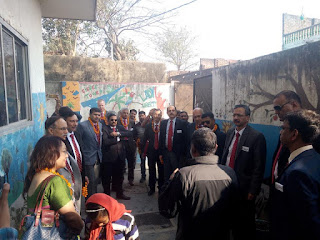